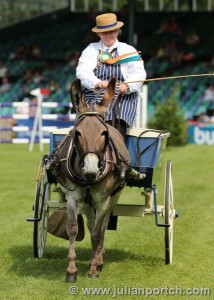 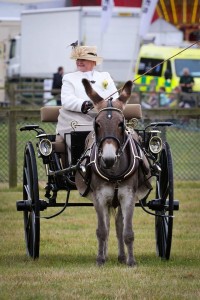 Royal County Of Berkshire Show 2019 4th in Private Drive Under 13.2 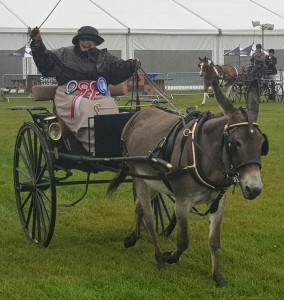 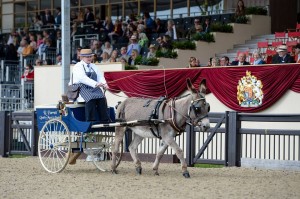 My equine hobby started  as a pony mad teenager, who managed to persuade my parents to buy me a pony, I competed various different activities mostly around the Pony Club (New Forest) Branch, including Camp at Salisbury Racecourse, various local shows but sadly my equine hobby was ended after a number of accidents which meant I had no confidence with ponies.

Move forward a number of years I ended up living at a house that had a donkey called Marmaduke (Victor Meldrew character)as part of the contents, this started my new hobby of donkey ownership, this led to showing them in hand, breeding, taking a bride to church, being on Countryfile and eventually the hobby of carriage driving where  I’ve broken to harness my 2 large donkeys Rikita & Sarah.  these have  competed in the show ring – Private Drive and Trade Classes (single turnout) and in Indoor Driving Trials as a Pair.

In recent years the donkeys have broken various records as they  have competed  at what is regarded as  pony or horse only events;

Main highlight ive expanded my business by purchasing Carriagelink (www.carriagelink.com), this established business is a marketplace for products associated to carriage driving  i.e. carriages, harness, horses/ponies/donkeys. Why not take a look at the website?

Sadly this year due to the pandemic, no shows to compete at, meaning time to break Monsieur Gilbert (Lady Sarah’s 4 year old gelding) to harness & see if he has the same calm outlook as his mum  (Lady Sarah) & Aunty (Lady Riki)!

New Forest & Hampshire County Show – 1st time in the shows history that a donkey enters in the HOYS Qualifier Class for Private Drive Vehicles, in which we came 6th  (Under 13.2hh)

Royal County of Berkshire Show (Newbury) – 1st time a donkey has been allowed to enter a Private Driving Class, we were placed 4th out of 5 with great comments from the Judge.

Finalist in the 2018 Carriage Driving Awards

2017 – Worshipful Company of Cartmakers 500th Anniversary Parade in London, Rikita took part in this Parade to celebrate that donkeys were originally used in work in the City of London.

During 2015, my 2 driving mares: Rikita & Sarah (being pure bred French Cotentin donkeys) spent 3 months on holiday in France living with a handsome Jack called Moustik du Suret, after being scanned (showing they were both in foal) they returned home, sadly Rikita lost her foal at some stage of her pregnancy, but her sister Sarah produced a delightful Colt foal, later named Monsieur Gilbert. He completed 2 shows in 2015 (New Forest Show & Romsey Show) where he seemed to enjoy the experience. For the next 3 years Gilbert will be shown in hand & eventually he will be broken to harness.

We can offer a variety of donkey and small pony training, including;

Located in Hampshire with excellent road/rail and air links.